A peculiar creature: the bowmouth guitarfish

Bowmouth guitarfish are named after their characteristic mouth that undulates like a longbow. As a species they’re unique. The front side of the fish looks like a ray with a flat, broad arc-shaped head. However, unlike rays, they have pectoral fins and a caudal fin attached at the end of their tail with two different sized lobes. Heavy ridges of spiky, sharp thorns on the bony ridges on their head and back give the guitarfish that almost prehistoric look, which is in total contrast to their human-like eyes. 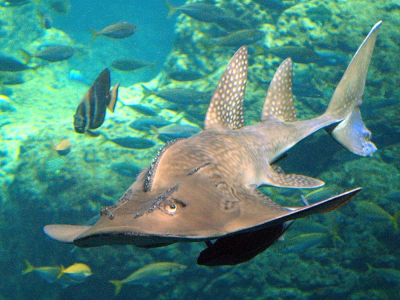 To sum it up, the guitarfish looks like a mix of a shark and a stingray. In fact, some scientists consider them to be ‘the missing link’ between these two different species. In reality, it’s a species of ray related to guitarfish and skates, and the only member of the family Rhinidae.

Other than its appearance, what makes this such a remarkable fish?

Bowmouth guitarfish go through color changes as they age. Juvenile bowmouths are brown with pale spots and black bars behind the eyes, while adults are black/charcoal or dark blue in colour, with small pale spots, with the black bars fading over time. The ventral side stays a creamy colour throughout the animal’s life. Marine biologists have studied the bowmouths’ ability to adapt their colouration to their environment. Indeed, when these fish swim over light sand, they tend to be lighter in colour. Swimming over a darker bottom, they become darker. 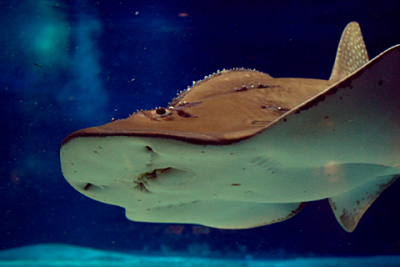 Bowmouth guitarfish eat crustaceans and molluscs, which live on the ocean floor. Their heavily-ridged teeth are like coffee grinders, which easily crush prey with hard shells. Since their eyes are on top of their head, they use their sense of smell to identify their potential meal.

Your best chance to see them is in shallow, coastal habitats such as coral reefs and mangroves. They live in the waters of the Indo-West Pacific. Bowmouth guitarfish are elusive creatures but can be spotted in the Red Sea and in the Maldives, among other places.

Currently, we have some great offers in both destinations.