The ‘spirobranchus giganteus’, better known as Christmas tree worm, can be found in many coral reefs around the world. They are a type of polychaete, a group of segmented worms that contains over 13,000 species. Just like their cousins, the “sea mice” and feather dusters, these unassuming invertebrates put on quite an eye-catching display.

Their Seuss-style colourful plumes are called “crowns”, and you may have noticed they come in pairs. That’s because each worm has two of them. By pumping water up and over the crowns, a Christmas tree worm can filter out tiny plants and animals to snack on. The feathery structures are lined with both sticky mucus and spiky bristles, which help trap passing prey. The crowns multitask by providing the worm with oxygen at the same time. 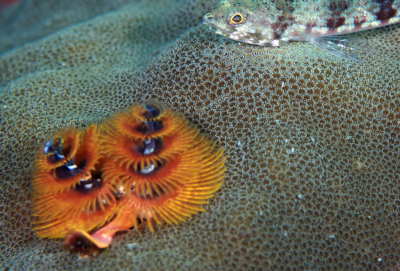 The crown forms only a small part of the tube worm. The majority of the worm’s body hides in a calcium carbonate tube (bunker) in or on the coral. They can live up to 30 years and their bunkers can reach 25.5cm in length. Christmas tree worms are very sensitive to disturbances and will rapidly retract into their bunkers at the slightest touch or passing shadow. They typically re-emerge a minute later, very slowly, to test the water before fully extending their plumes. 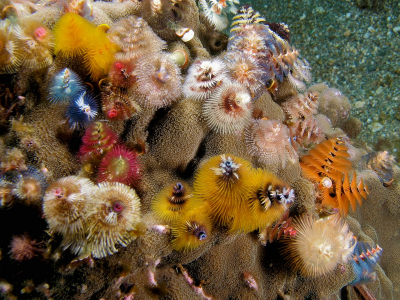 There are male and female Christmas tree worms and they reproduce by spawning. In this case, it means that they shoot their genetic contribution into the surrounding water and hope for the best. Once fertilisation occurs, it takes just 24 hours for a larva to develop.

A very common and colourful sight, they surely have a way to brighten up every dive site!