The box fish, also called trunk fish or cow fish, is a member of the Ostraciidae family and a close relative to the puffer fish. It normally grows no larger than 45cm and as the name suggests, it is box-shaped. It tends to bumble around slightly awkwardly in the water. This is due to their particular build; the plate-like scales of its body are fused together to form a solid box-like carapace and the fins, tail, eyes and mouth protrude from this. Due to this armour, alike a mini-tank, it moves slowly and uses its pectoral fins for propulsion.

Generally, the males are brighter in colour than the females. Box fish normally live in harems of one male and several females. As they‘re omnivores, their diet consists mainly of algae, but also sponges, crustaceans, worms and molluscs. Using its puckered lips, it blows small bursts of water at the corals and sand to reveal any juicy snack that might be hiding. Box fish are found throughout the world and are most commonly associated with coral reefs. They can also be found near rocky areas, sand flats or grass beds. 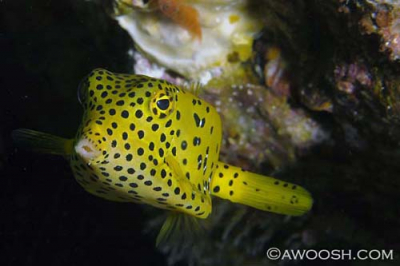 One of the most common box fish types is the yellow box fish ‘Ostracion Cubicus’. The juveniles are bright yellow in colour with black spots. This bright colouring serves a good purpose, other than being extremely photogenic and adorable; it informs predators they are poisonous. As the fish ages, the brightness fades and very old specimens will have blue-grey to black colouration with faded yellow.

Aside from their armoured bodies, box fish have another, lethal, weapon to fend off predators: the ability to release a toxin called ‘ostracitoxin’. Interestingly, this toxin works in a way like no other known fish toxin. When in danger, the box fish secretes this toxin from special cells covering their entire skin and quickly disperses this clear mucus in what is effectively an invisible cloud of regret for any engaged predator. The toxin is very potent and makes the predator’s red blood cells burst. The toxic mucus adheres to the predator’s gills and slowly asphyxiates it.

In short, as cute as box fish may look, do not mess with these little boxy bumblebees. They can be found in many of our destinations; Thailand, Myanmar, the Maldives, Egypt, just to name a few. After reading this blog, you’ll probably look at them with different eyes.