A common sighting in tropical waters, most divers will probably have come across a frogfish on one of their dives. These fascinating, slightly mysterious creatures belong to the angler fish family and are known for their amazing ability to camouflage. You can often swim right over this master of disguise without seeing it, until someone points it out to you. At that point, you usually wonder how you could have missed it. 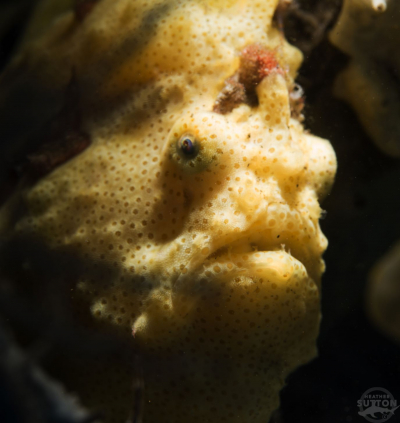 Frogfish can adjust their colours and form to match their surroundings, but it’s not an instant change like it is for cuttlefish and octopus, for a frogfish it takes time, from several days to a few weeks. Interestingly, its amazing camouflage skill is not the main tool a frogfish uses to catch its prey. Being an angler fish, a frogfish possesses a special developed dorsal fin that has a retractable ‘lure’ resembling a shrimp, worm, or squid. Dangling the bait right in front of its eyes, the frogfish’s renowned hunting strategy is to remain completely still. As soon as a fish comes close enough to the bait, the frogfish sucks it in with incredible speed and devours the prey whole. Taking no more than around 6/1,000 of a second, it is the fastest ‘gape and suck’ of any fish. 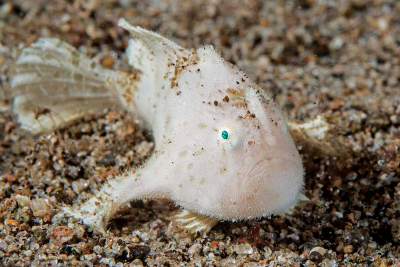 Frogfish have extremely flexible bellies, enabling them to ‘stomach’ prey up to twice their own size. If the swallowed prey is too big, they are forced to spit it back out as they don’t have teeth to chew the prey; a lucky escape for the potential “meal”.

Frogfish make for great photography subjects; they normally sit motionless on a sponge or a coral, while some even show off their French manicure (white nails). When they want to move or jump, they suck in water through their mouth and then force it out through their gills, making it literally jet propelled.

Have a look at the short video below to see how they move. By the way, this frogfish also shows off its French manicure.