How smart are fish?

Originally, scientists believed that humans were the only ones capable of using tools. However, further research showed that certain animals in fact do understand the relationship between a method and a result, as well as the purpose of an object.

Using a tool implies that an animal uses any kind of object in order to achieve a goal, such as acquiring food, defense or sometimes even recreation. Biologists have already observed animals displaying this behaviour in land-based animals such as monkeys and birds. Yet, it’s still very rarely observed underwater. You’re probably aware that the ocean is vast and many species have not yet been discovered yet.

Take a look at some fascinating examples of tool use by underwater creatures:

Octopuses have been witnessed transporting coconut shells to use as a protective shelter in areas where there is no shelter. The coconut octopus, as it is called, can be seen among others in the Philippines and Indonesia. 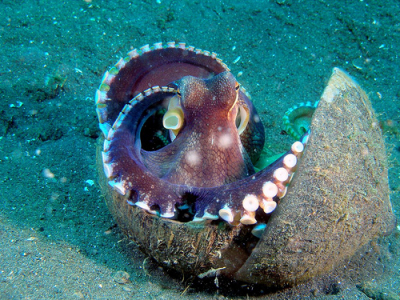 Many dolphins have been observed covering their snouts with basket sponges torn from the seafloor as they forage for food. The sponge helps them uncover fish hiding in the sandy sea bottom and protects their snouts from scrapes and stings. Other tools dolphins use are conch shells, in order to trap tasty fish, before shaking their catch into their mouths.

Several species of wrasses are known to open clams by throwing and striking them against a chosen hard coral to break it apart. The wrasse starts this process by searching out clams across corals. Once the wrasse finds one, it brings it to a specific rock. The rock is used as an anvil by smashing the mollusk apart with side-ward thrashes of the head.

Check the master at work here: