Last month, Nick from our Sales department has been lucky enough to visit the Tuamotu Archipelago in French Polynesia for a FAM trip. We caught up with him to find out how he got on:

“Once I got to New Zealand, I was only a 4-hour flight away from Tahiti. Arrival in Tahiti was smooth and after a night at an airport motel, I took a morning flight from Tahiti to Rangiroa. From here, we were dropped off at a local pension, which is located near Tiputa Pass. This is the legendary channel dive in Rangiroa. At the agreed time, Cruise Director Alex came to meet us at the pension and we walked to the embarkation point where we boarded M/V French Polynesia Master.

After embarkation, we were given detailed briefings by Captain Stephan and Cruise Director Alex. These briefings included the safety and the evacuation briefs. Afterwards, we settled into our cabins and had a delicious dinner.

The dive briefings were very informative, and it made me realise that French Polynesia is very different compared to our other dive destinations. Upon surfacing, each diver needs to take off all their equipment in the water and pass it onto the tender driver. Another mandatory regulation in French Polynesia: Nitrox measurements need to be overseen by the crew and are then to be forwarded to the Government. 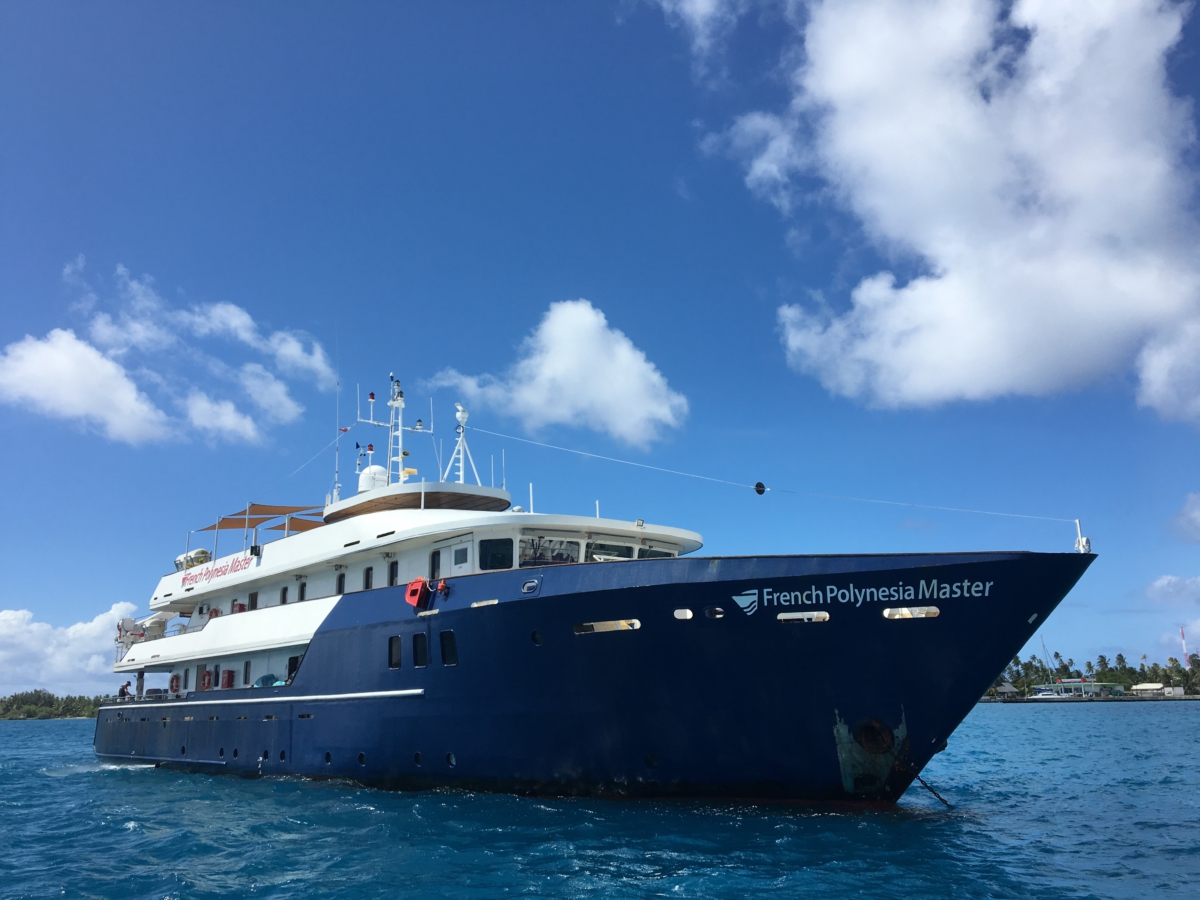 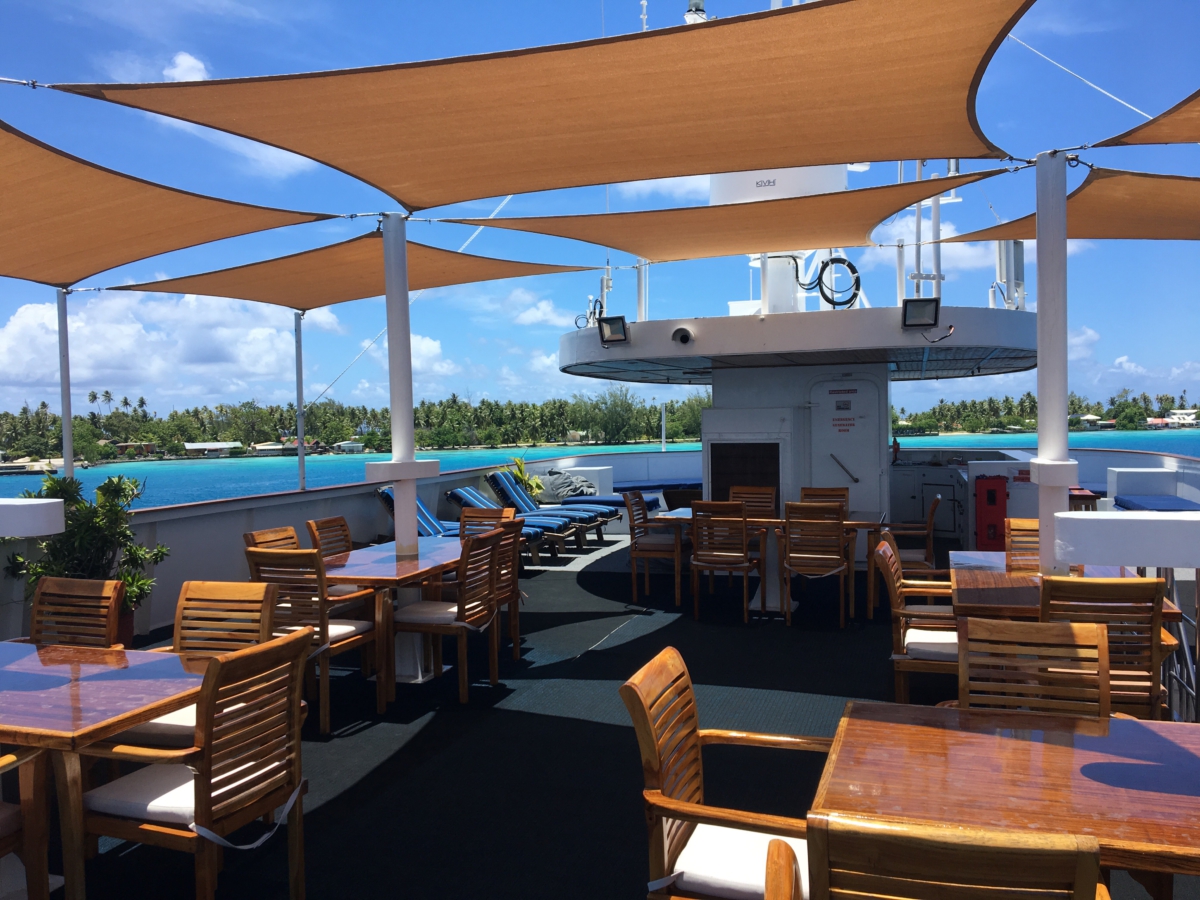 We spent the first 2 days of diving in Rangiroa’s Tiputa Pass. Our first dive was on Windmill on an outgoing current and most guests had the resident family of dolphins come and dance in front of them. The second dive took us to Caves, where you can spot nurse sharks in a cavern. Having an incoming current, we lucked out spotting dolphins, eagle rays and plenty of grey reef sharks. The third dive took us to Canyons, where we had fantastic time drifting on an incoming current. This epic drift dive was filled with lots of grey reef sharks and a silver tip shark.

The second day in Rangiroa turned out to be really cool as well. We started at Half Wind Mill, followed by Canyons again, this time with outgoing current. After a great day of diving, we made our way to Apataki Atoll.

Our first dive in Apataki atoll was at a site called Tutao in an outgoing current. We managed to spot around 25 baby reef sharks and big shoals of barracudas. Nohinimo, on an outgoing current, surprised us with a sighting of a great hammerhead shark, plus 3 eagle rays. To top off this beautiful diving day, Tehere Pass on an incoming current turned out to be the best dive of the day. The current was super strong, and we hooked on halfway down the pass to watch about 50 grey reef sharks swimming against the current. Apataki was really impressive and a brilliant atoll to dive. 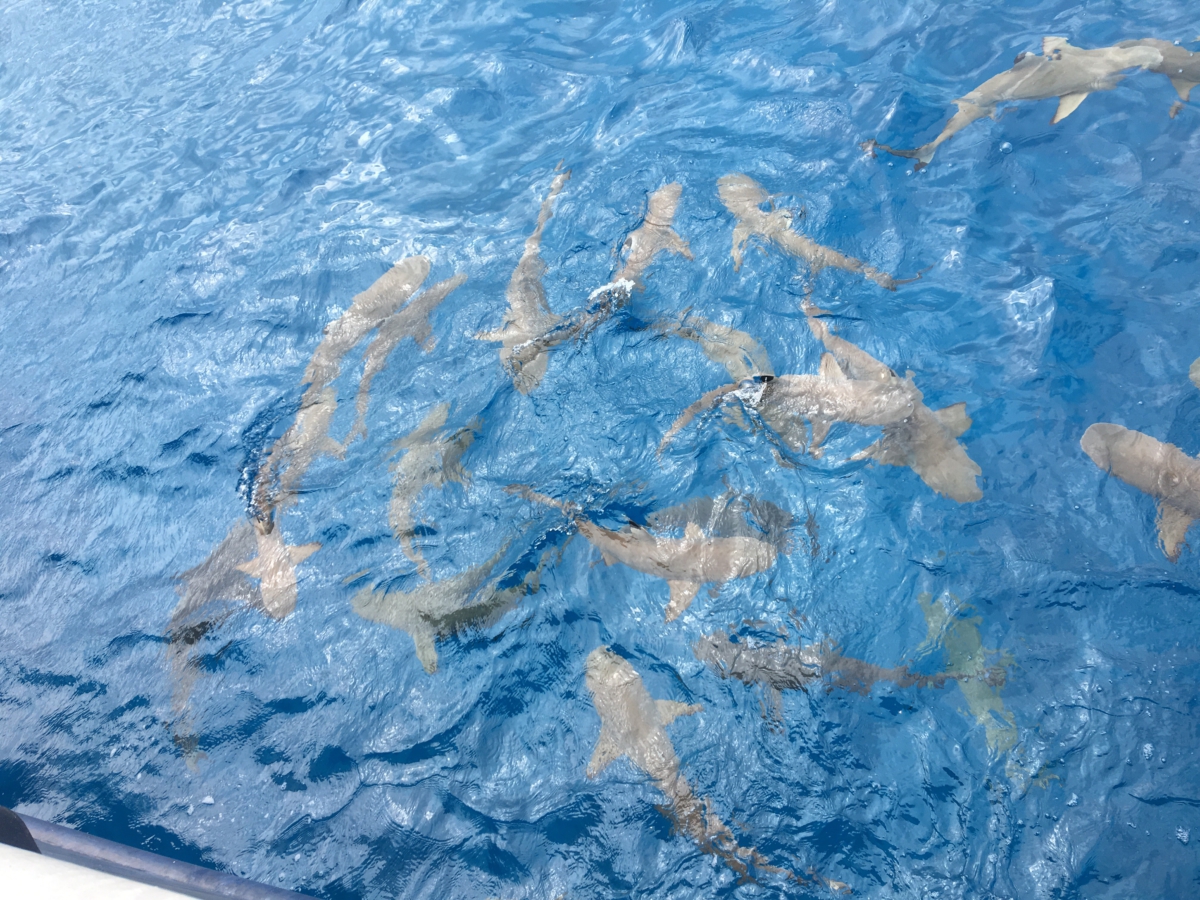 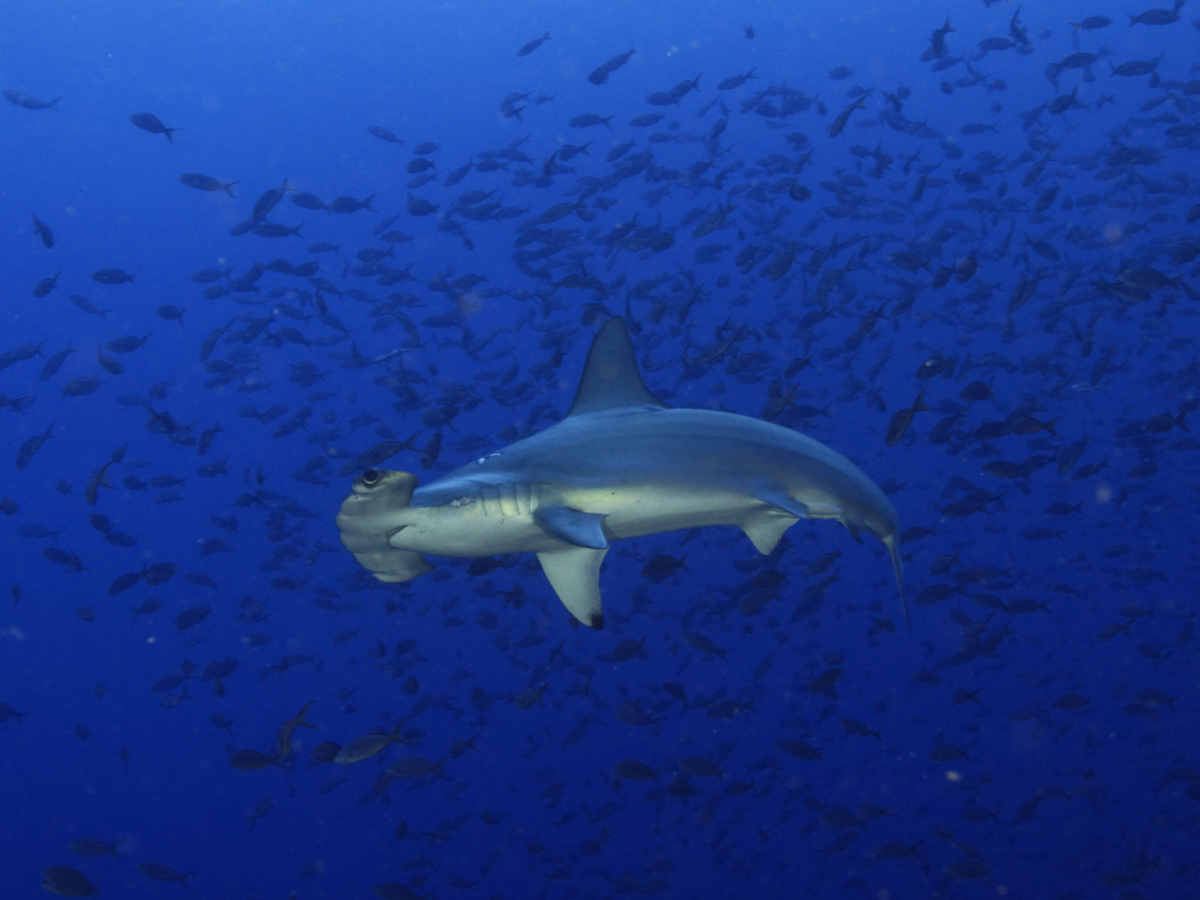 Onwards we went to Toau atoll, where we did 6 amazing dives in two days. We dived sites on both the western and eastern site of the atoll. Two of the dives starred mantas, eagle rays and around 100 grey reef sharks!

After some great dives in Kauehi atoll, we arrived in Fakarava South. For me, this site made the trip incredible.  Without a doubt the best dive I’ve ever done was here on the famous ‘Wall of Sharks’ and finishing at the jetty. Being around 200 to 300 sharks as well as eagle rays was awe-inspiring and will stay with me forever. The northern part of the island even showed us mantas!

Highlights were the family of dolphins at Rangiroa Pass, the great hammerhead at Apataki Pass. Without a doubt the best dive I’ve ever done was at the Wall of Sharks in Fakarava South.  It was a mind-blowing experience!”

Check out Nick’s video below: