1 February, 2021 1167 Views
Our Ten Facts about Diving the Red Sea should have you in agreement that it’s an epic SCUBA diving experience. You are truly spoilt with shallow reefs, shear walls, pinnacles and open ocean drifts, all waiting for you to explore.  Another popular feature of the Red Sea is the impressive shipwrecks on offer.

The SS Thistlegorm Wreck is probably the most famous.  Classed as one of the best in the Red Sea, and is actually considered by many as the best Wreck dive in the World.  For those who haven’t had the chance to meet her yet, she is a World War II ship wreck located in the North of Red Sea in the Strait of Gubal.  An incredible former 128m long British transport ship, that sunk in 1941 after a German air attack.  There are some amazing sites to take in, as there are two locomotives, two tanks, Army Trucks, jeeps, Motorbikes, Boots, stacks of rifles, and various spare parts for planes and cars.  It’s like you’ve stepped back in time, or you’re diving in an underwater museum.
Let’s not forget about the Dunraven and Ghiannis D. Both amazing wrecks in themselves, but with an abundance of marine life to bring it to the next level. So enough about why you should go there, and on to the facts about the Red Sea that you may or may not know…

The Red Sea is home to over 1200 species of fish and 250 species of coral. Of these, 17% of the fish species and 8% of the coral species are endemic to the Red Sea.

The Red Sea is sometimes referred to as the “Underwater Garden of Eden”.  This is mainly due to the sublime submarine paradise full of 1,000 different kinds of fish, more than 1,000 species of invertebrates and about 400 types of corals.

The Red Sea is bordered on its eastern shore by Israel, Jordan, Saudi Arabia and Yemen, and on its western shore by Egypt, Sudan, Eritrea and Djibouti.

The Red Sea’s name is a direct translation of its ancient Greek name, Erythra Thalassa…. A popular hypotheses about the origins of the Red Sea’s name is that it contains a cyanobacteria called Trichodesmium erythraeum, which turns the normally blue-green water a reddish-brown.

The salinity of the Red Sea is amongst the highest of all oceans in the world at 3.6 to 3.8%. You might need to adjust your weights accordingly.

The Red Sea is the northernmost tropical sea in the world, because its waters cross the Tropic of Cancer.

The Northern Red Sea is considered by CEDAM to be one of the 7 Underwater Wonders of the World because of its extreme beauty and the biodiversity of marine life there. 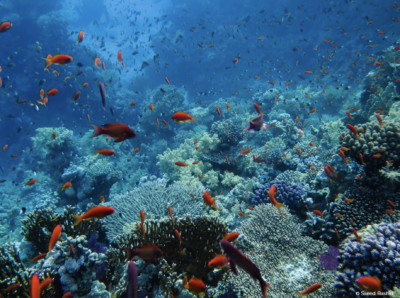 If you would like to start planning your next diving experience, why not check out our website?  You’ll also find lots of inspiration from our 21 Itineraries for 2021. Packed full of itineraries recommended by our staff