This gentle, giant fish belongs to the wrasse family and is commonly called humphead wrasse. Always a diver’s favourite, not only for its colourful presence but also for its approachable nature. Usually fearless, they will swim alongside you. Enjoy those moments and capture the beauty of this fish up close.

Napoleon wrasses inhabit many oceans in the world; including the Red Sea, Indian Ocean, and the Pacific. They have a set of unique characteristics.

Upon reaching sexual maturity, around 8 years old, a Napoleon wrasse can change sex, only from female to male. It involves their female red-orange colour changing into a ‘male’ deep blue-green colour. What exactly triggers this change is still up for debate. Some scientists suspect it has to do with maximising the chances of reproductive success. Gender switch can be prompted by the disappearance of a dominant male. Female Napoleons seem to only turn into males when there’s a shortage of males. 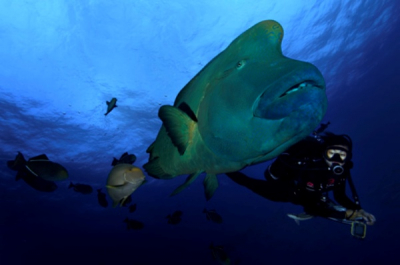 Napoleons may live up to an impressive 30-50 years, with females outliving males. The older males have a prominent hump on their forehead and take on a brilliant blue colouration. At the same time, the characteristic patterns on their face become more intense in color.

The Napoleon wrasse is one of the few fish able to eat toxic animals such as boxfish (link to previous blog), sea hares and crown of thorns starfish. For this reason, Napoleons play a key part in the marine food chain in order to maintain a balanced and healthy coral reef.

The eyes of a Napoleon wrasse can rotate 360 degrees. Their eyes are constantly moving, always swiveling around to observe their surroundings.

You can spot them in many of our destinations including Palau, Red Sea, the Maldives, Thailand, Myanmar, the Solomons and Papua New Guinea.