The legendary wrecks of Truk Lagoon

Tucked away in the remote atolls of the North Pacific, Truk Lagoon – recently better known as Chuuk Lagoon – is part of the Federal States of Micronesia. During WWII, Truk was the main base of the Japanese Imperial Navy operations in the Pacific. In 1944, the Allied Forces (by means of the US) launched Operation Hailstone and attacked the Japanese fleet in Truk. This massive air strike resulted in more than 60 wrecks scattered in the lagoon on various depths, suitable for both recreation and technical divers alike. Truk lagoon is now renowned as one of the wreck-diving capitals of the world.

If you’re an avid wreck diver, read on, discover some of Truk Lagoon’s most famous dive sites below:

The ‘Fuji’ is a signature dive of Truk Lagoon. Measuring 132 metres in length, this armed cargo ship offers several cargo holds to explore. She ended up sitting perfectly upright on the sandy bottom between 9 and 37 metres depth. The cargo she was loaded with consists mainly of aircraft parts for Zero Fighter aircraft, Mitsubishi A5 and A6. You’ll find engine parts, propeller blades and fuel cells, amongst other things. The telegraph is richly decorated by corals and and bowgun is still intact. The Fuji is a very photogenic wreck. 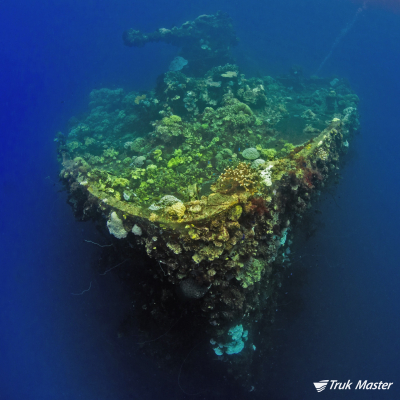 This Japanese 105 metre long submarine actively participated in the attack on Pearl Harbour. After Operation Hailstone, a second air raid took place and the submarine had to submerge urgently for cover. While doing so, the crew forgot to close a few valves and she partly flooded. The Sub Shinohara sits upright between 27 and 39 metres depth. Covered in marine life, she is a diver’s dream. 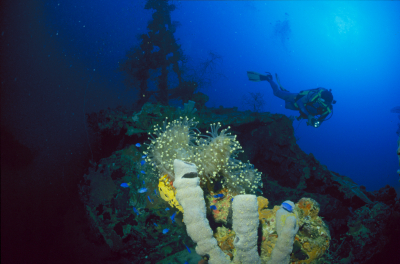 The large, 152 metre long, oil tanker Shinkoku Maru now rests upright on the bottom encrusted with hard and soft corals, sponges & hydroids. Schools of juvenile fish and fan corals adorn her outsides. Highlights include the telegraph room on the bridge, a spacious engine room and a galley that still features many utensils on the large stove. Bow guns, mounted fore and aft are also covered with corals making this one of the most colourful and spectacular wrecks to be found in Truk. 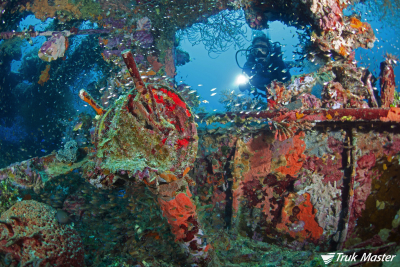 Suitable for the technical divers amongst us, this fascinating 117 metre passenger and cargo ship weighs 5,831 tons and lays upright at a depth of 62 metres. Check out the remains of many well preserved war-relics, including three large tanks resting on the main deck at 50 metres. There is a beautiful bow gun and her holds store many war materials, such as ammunition crates, artillery shells, aircraft bombs, mines and torpedo bodies. 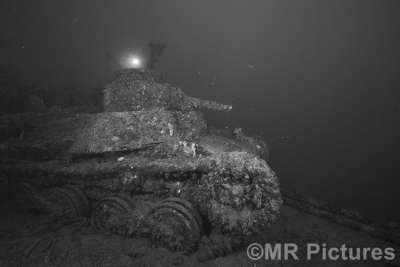 Find out more about the wrecks in Truk >>