To celebrate Wreck Week and with the Red Sea as our Destination of the Month, our Northern Wrecks and Reefs itinerary is the perfect trip to explore all the great wrecks that the Northern Red Sea has to offer.

Some highlights of the tour includes the SS Thistlegorm wreck, Ras Mohamed National Park, and Abu Nuhas aka Ships Graveyard. It’s a classic Red Sea route which allows all levels of diver to experience the intrigue of multiple wrecks and the vibrancy of life in and around Egypt’s shallow-water reefs without a wealth of diving experience. 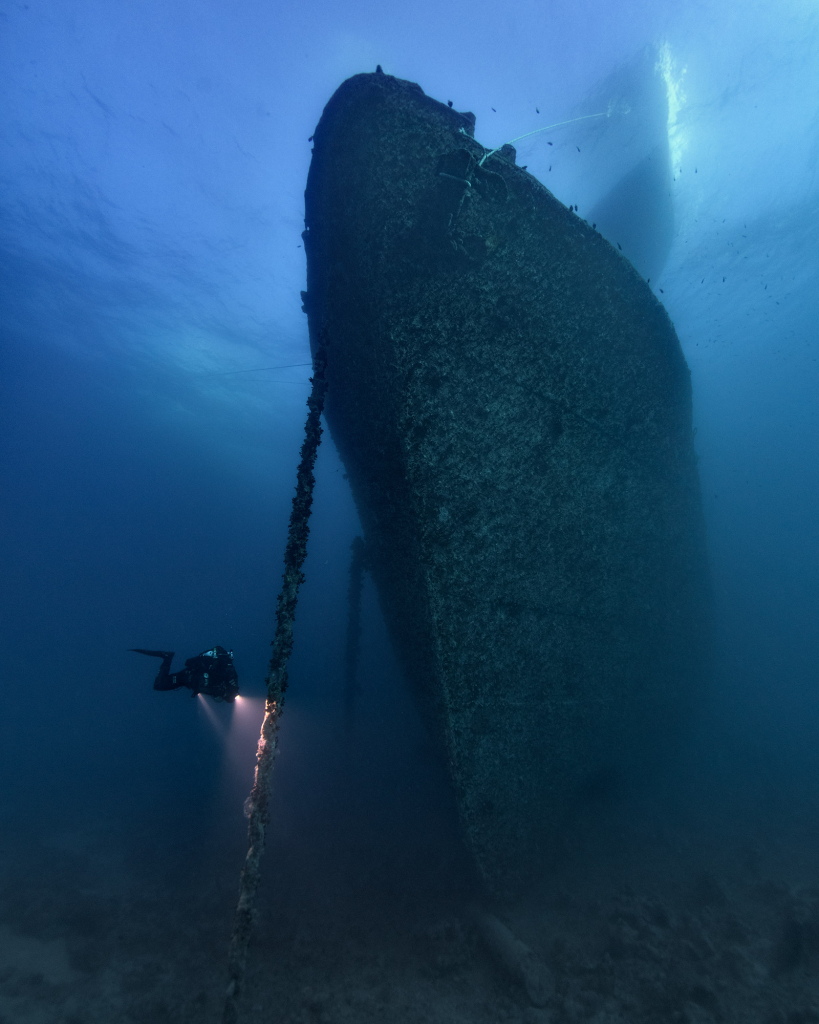 Sitting 30m deep on the west coast of the Sinai Peninsula, the SS Thistlegorm was a British armed Merchant Navy ship built in 1940 in Sunderland, England. On the 6th of October 1941, whilst anchored in what was thought to be a safe zone, the SS Thistlegorm was spotted by long-range German bombers who proceeded to drop two bombs and sink her almost immediately. The majority of the damage was done by the ammo stored in the hold, all but nine of the crew escaped and she has since sat as an underwater museum.

To dive her, contact starts at around 15m where you’ll reach the main deck and can enter the first hold from a large entrance in the floor. The ship has two levels in its holds and you can actually swim through the wreck from Hold 1 to 3 inspecting its vast amount of cargo along the way. On the outside of the wreck you can see where the hull was ripped open revealing much more of the ship’s cargo. At the stern you’ll find a heavy, mounted machine as well as a 4.7 inch anti-aircraft gun. And off to the port side around the blast area you can find one of the steam locomotives which was thrown from the deck during the bombing. 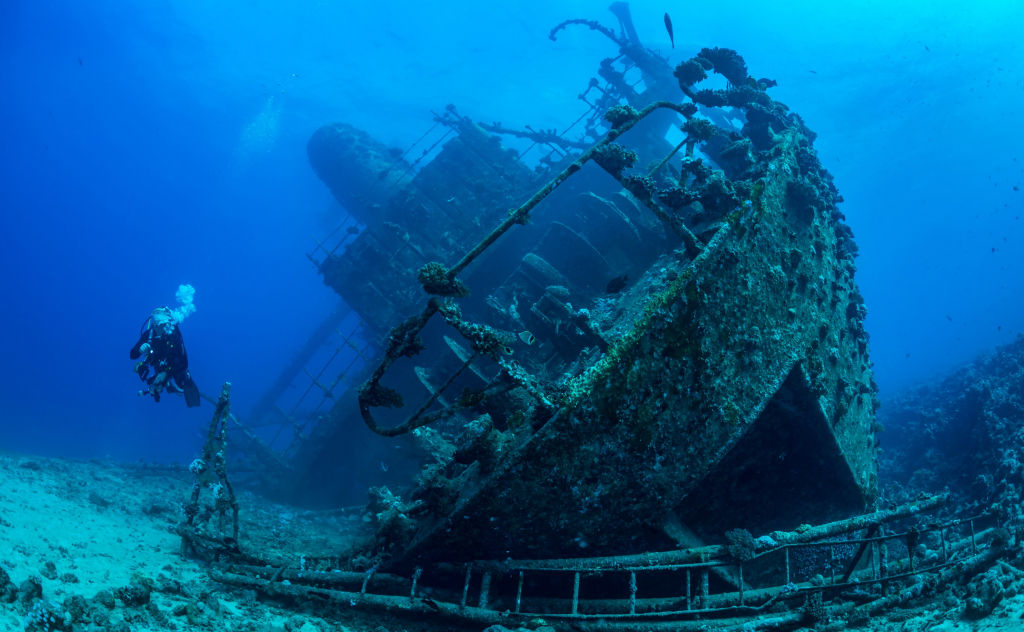 Sha’ab Abu Nuhas is one of the more well-known slabs of reef in the Red Sea thanks to its penchant for sinking unsuspecting cargo ships. Such is its reputation that the triangular-shaped coral reef has come to be known as Ships Graveyard. Over the years the reef has claimed at least four cargo ships which now sit on its northern edge, the most recent of which was The Giannis D in 1983.

The 99m freighter built in Japan was carrying a cargo of wood when she hit the reef squarely and split in two as she sank. The Giannis now sits in those two halves with the stern around 20m deep and the top of her mast at a safety-stop-friendly 4m. Divers can enter the wreck via the stern and access the bridge, engine room and accommodation areas while watching out for moray eels and octopus. 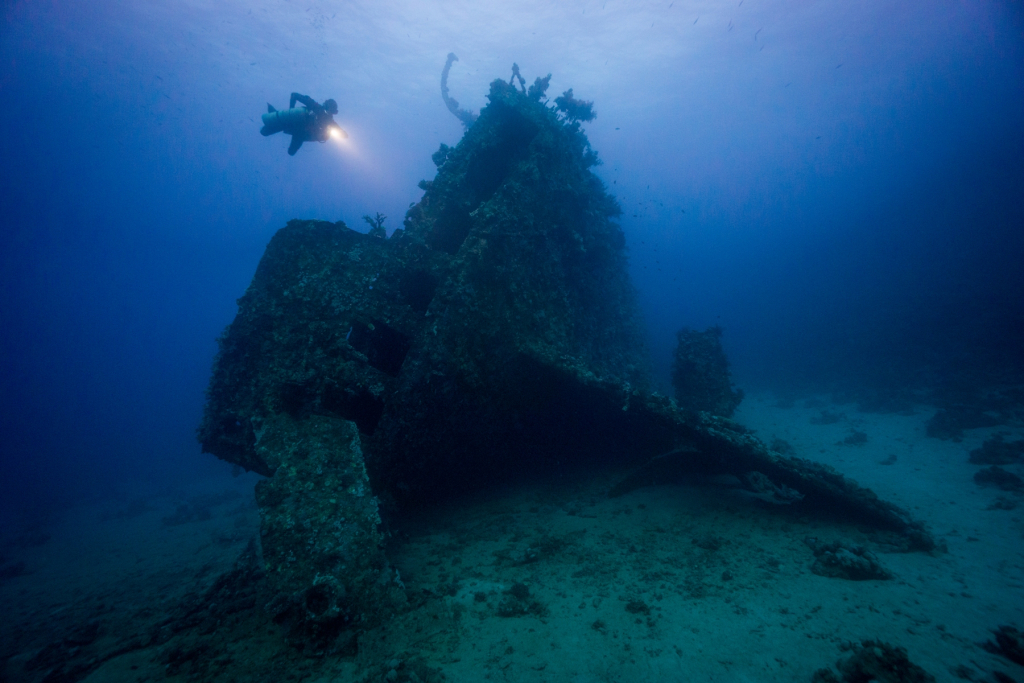 Perhaps the most interesting, and for that reason the most popular wreck at the base of Abu Nuhas, is the British built Carnatic. A hybrid steam ship that struck the reef on 12 September 1869 laden with gold, wine and cotton on route to India. She hit hard and ended up stuck atop the reef for a couple of days before breaking in half and then finally being abandoned by the crew.

Today, 149 years later after salvage operations (that’s right, the treasure’s gone…) and the Carnatic is a fantastic dive site. The wreck lies in around 22m of water tipped onto her port side and despite being broken in half, she lays resting in a way that makes it easy to imagine how she once looked. The wooden decking is long gone making it possible to swim between her decking beams and inside the stern you’ll find plenty of glassfish and sweepers. Every exposed surface of the wreck is covered in soft and hard corals essentially making it an extension of the reef. The “Wine Wreck” isn’t one to miss.

Find out more about the Northern Wrecks and Reefs itinerary >>>